The Tongariro Crossing parking has a 4-hour time limit - Park your car in the Tongariro Shuttle Car Park and catch the shuttle with the team!

One of the most amazing treks you can do in New Zealand is the Tongariro Alpine crossing. Tongariro National Park is New Zealand’s first national park (and the fourth in the world). It was first named a UNESCO World Heritage Site in 1887 due the importance of the area for its natural features.  In 1993, it was given a double World Heritage Status – one for its natural value and the other for cultural significance.

The trek will take you across a gorgeous landscape dotted with craters of different colours and shapes, steam vents, scoured volcanic rocks, jagged lava flows, sparkling emerald lakes and dramatic vistas. The area was formed over 300,000 years of volcanic activity and ancient glacial retreat – a landscape woven from the story of fire and ice.

Getting Started on Your Trek
If you plan to take this marvelous walk, the most common issue you’ll come across is parking. There is a 4-hour time limit for the car park at the start of the track (Mangatepopo Car Park) and at the end of the track (Ketatehi Car Park) – so unless you’re a whiz at timing your trek, this might be an issue.

A great alternative that can give you one less thing to worry about during your adventure is to take the one-way shuttle from end to start. Tongariro Expeditions has a private car park situated just across the road from the Katetahi car park entrance. It is called the Tongariro Shuttle Car Park.

All you need to do is park your car in the Tongariro Shuttle Car Park and catch the shuttle with the team to the start of the track. You will be given a map and an information sheet, then you can hike your way back to your car at your leisure. This means that there is no need to rush for a bus in the afternoon – no waiting for the bus or worse, missing it altogether.

You can also start the track a bit later with several departure times available. You can catch the one-way shuttle at 6:30am, 7:30am, 8:30am and 9:30am. Book ahead as the parking is limited. 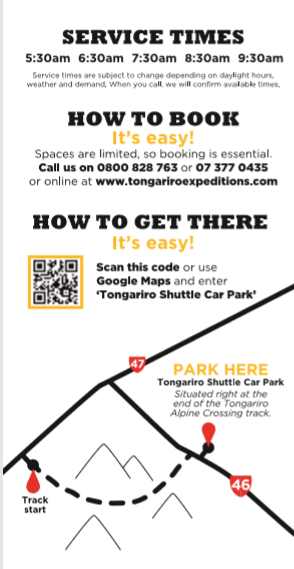